Domestic holiday hotspots in the South West have been deluged by downpours amid one of their rainiest Mays on record.

While people in the UK have been encouraged to holiday at home amid international travel restrictions, popular retreats in Devon and Wales have been ravaged by potentially record-breaking levels of rain.

This comes amid a particularly wet spring for the UK as a whole, the Met Office has said.

With nine days still to go, Wales has seen almost double the average levels of rainfall for the entire month.

The nation has been hammered with 170mm of rainfall so far, making this month already Wales’ fourth dampest May on record.

On average, the nation normally sees 86mm of rain in May, with the record being 184.2mm.

This makes it the eighth wettest May for the south-west pocket of the UK, against a record of 190.3mm.

Met Office meteorologist Annie Shuttleworth said the UK as a whole has seen 131% of the usual month’s rainfall already. 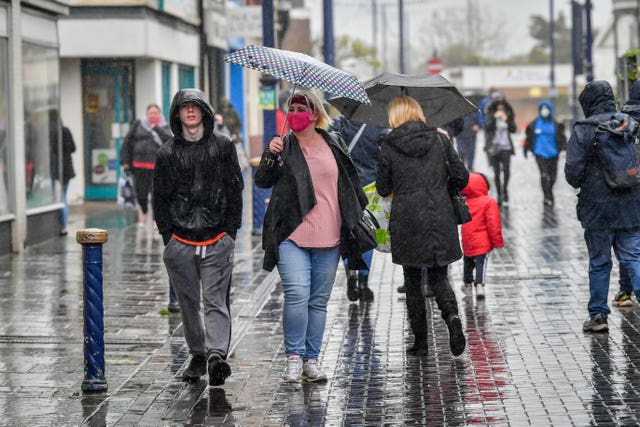 Ms Shuttleworth said: “We have seen a lot of rain in Devon and Wales over the past week.

“They have seen well above those average in those sorts of regions.

“But there is a good deal of uncertainty in the forecast, so we’re hoping by the end of May we will have much drier and more settled weather across the UK.

“If this drier weather does come in, it looks like it will scupper any rainfall carrying on and accumulating as it has at this point in the month.”

As more rain and gale-force winds are forecast for the weekend, the Royal National Lifeboat Institution (RNLI) has released dramatic footage of a surfer being rescued nearby the seaside resort of Trearddur Bay in Anglesey, Wales.

The footage shows the crew returning to shore after braving giant waves rallied by 50mph winds to rescue the casualty, who had drifted dangerously close to rocks on Thursday evening.

RNLI Helm, Lee Duncan, said the rescue was the closest call he has seen in his two decades working on the bay.

Mr Helm said: “The conditions were treacherous with a strong south-westerly blowing in excess of 50mph, we were operating right at the limit of the Atlantic 85 lifeboat.

“I think in my 20 years on the crew at Trearddur Bay that was possibly the most touch and go shout I have been on.”

Volunteer crew member Daf Griffiths added: “We knew that we had only one chance to get her with the size of the waves hitting the headland, had we failed, I don’t like to think what could have happened, to her or us.”

While the Met Office has issued a yellow weather warning for strong winds on Friday in south-east England – stretching from Norwich to Southampton and including London – the RNLI has advised people to stay out of the water.

Lifeguards have urged dogwalkers to take care when walking near cliffs, including keeping their pets on a lead and bringing fully-charged phones with them.

The RNLI has recommended that anyone who does enter the sea checks tide times daily and ensures any equipment and lifejackets are in full working order beforehand.

Weekend washout to continue into next week, forecasters warn

South East sees month’s worth of rainfall in one day

Weekend washout to continue into next week, forecasters warn

South East sees month’s worth of rainfall in one day

Sunshine and showers for first weekend of relaxed rules in England