The devastation caused by coronavirus will see the economy shrink by its largest amount for 300 years and Government borrowing reach levels previously unseen in peacetime.

Chancellor Rishi Sunak warned there would be lasting damage with the economy shrinking by 11.3% in 2020 and not recovering to pre-crisis levels until the end of 2022.

Unemployment is forecast to hit 2.6 million by the middle of 2021, official forecasts from the Office for Budget Responsibility (OBR) said.

The “long-term scarring” from the crisis means that in 2025 the economy will still be around 3% smaller than had been expected in March this year, Mr Sunak told MPs.

The Chancellor said: “Our health emergency is not yet over. And our economic emergency has only just begun.”

The dire state of the public finances means an estimated 1.3 million public sector workers will see their pay frozen while the overseas aid budget is being slashed by billions of pounds – prompting the resignation of Foreign Office minister Baroness Sugg.

The Government will borrow an eye-watering £394 billion this year, equivalent to 19% of Gross Domestic Product (GDP), a measure of the size of the economy – which is the highest ever recorded in peacetime.

Although borrowing will subsequently fall, the national debt is forecast to reach 97.5% of GDP in 2025-26. 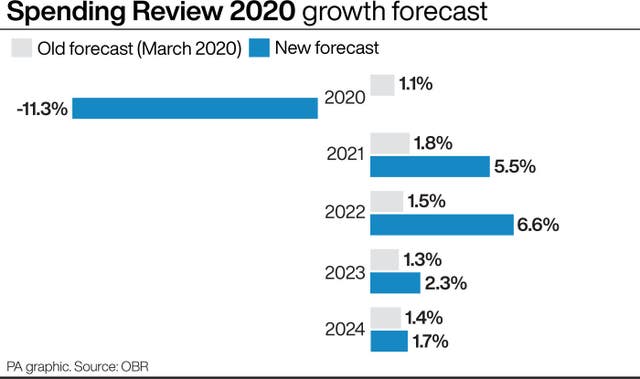 “This situation is clearly unsustainable over the medium term,” Mr Sunak admitted.

The Chancellor said he “cannot justify a significant, across-the-board” pay increase for all public sector workers given the difficulties faced in the private sector.

Over a million nurses, doctors and others working in the NHS will get a rise but increases for the rest of the public sector will be “paused” – except for 2.1 million workers earning below the median wage of £24,000, who will receive at least £250 extra.

The cut to the aid budget sees the Government reneging on a legal pledge and manifesto commitment to spend 0.7% of national income on development assistance.

Mr Sunak said: “Sticking rigidly to spending 0.7% of our national income on overseas aid is difficult to justify to the British people, especially when we’re seeing the highest peacetime levels of borrowing on record.”

The Government faced condemnation from charities and a potential Tory revolt when legislation for the move comes before Parliament.

Archbishop of Canterbury Justin Welby said it was “shameful and wrong” while Conservative former international development secretary Andrew Mitchell said it would be “the cause of 100,000 preventable deaths, mainly among children”.

Baroness Sugg used her resignation letter to condemn the “fundamentally wrong” move, telling Boris Johnson it would “diminish our power to influence other nations to do what is right”.

But Mr Sunak insisted that “at a time of unprecedented crisis government must make tough choices” and promised that spending would return to 0.7% “when the fiscal situation allows”.

To help cope with rising unemployment, the Chancellor set out a nearly £3 billion Restart programme to help get people back into work.

For those in work, the national living wage will increase by 2.2% to £8.91 an hour – although it had been expected to increase to as much as £9.21 – and the minimum wage will also rise.

Mr Sunak said £280 billion was being spent on the coronavirus response this year.

Next year some £55 billion was earmarked for public services dealing with the crisis, including an initial £18 billion for testing, personal protective equipment and vaccines.

Despite the dire national finances, total departmental spending will be £540 billion in 2021-22, a £14.8 billion rise in cash terms.

Over this year and next, day-to-day departmental spending will rise, in real terms, by 3.8% – the fastest rate in 15 years.

There will be £27 billion spent on economic infrastructure in 2021-22.

The Scottish Government’s funding will increase by £2.4 billion, Wales will receive £1.3 billion and there is £0.9 billion for the Northern Ireland Executive.

The Chancellor also promised extra help as part of the Government’s “levelling up” agenda, with a new £4 billion fund available for projects across the country which have support of local communities and politicians.

A new UK infrastructure bank will be based in northern England while the UK Shared Prosperity Fund – replacing European Union funding – will reach around £1.5 billion a year.

Confederation of British Industry chief economist Rain Newton-Smith said the Spending Review “lays the foundations for a brighter economic future” but “ambition must be matched by action on the ground”.

But Trades Union Congress general secretary Frances O’Grady said: “For all the Government’s talk of levelling up, this spending review will level down Britain, hitting key workers’ pay and breaking the Government’s promises to the lowest paid.”

The Institute for Fiscal Studies (IFS) said £9.6 billion of the increase in departmental spending will go to just three areas – health, defence and schools.

“Other areas are facing more of a squeeze and some could even be facing cuts after next year,” the economic think tank said.

Spending was also £10 billion less than previous plans for non-Covid “core” budgets, the think tank said, in part due to the pay squeeze and aid cut.

Ministers must ‘get a grip’ on export issues, seafood processors say

Covid-19 insurance ruling: How did we get here and what next?