Police have charged a second man and a 14-year old boy with the murder of a teenager who was chased and stabbed to death.

Dea-John Reid, 14, was killed in College Road in the Kingstanding area of Birmingham at about 7.30pm on Monday.

George Khan, 38, and the boy – who cannot be named for legal reasons – were charged with the schoolboy’s murder by West Midlands police on Thursday.

Both are due to appear at Birmingham Magistrates’ Court on June 4.

It comes after 35-year-old Michael Shields, from Alvis Walk in Castle Bromwich, appeared at Birmingham Magistrates’ Court on Thursday, also charged with the murder.

Shields was not required to enter any pleas and was remanded in custody until Friday when he will appear at the city’s crown court.

Police are also appealing for information regarding a car believed to have been used during the attack.

It is thought the offenders arrived and left the scene in a dark blue VW Golf with the registration number TN07 GBR.

Officers have been trying to locate the vehicle but so far it has not been found. 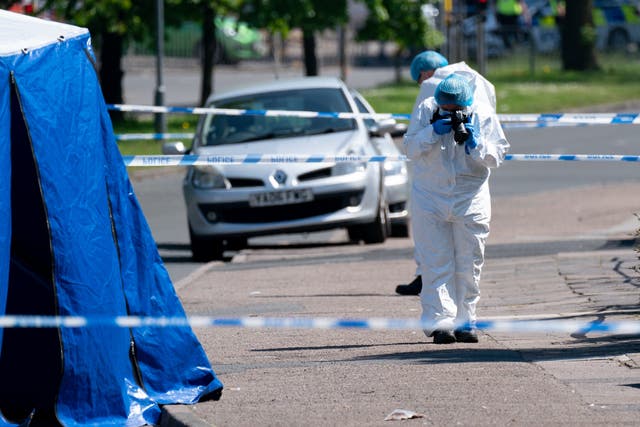 Detective Chief Inspector Stuart Mobberley said: “We really need to trace this VW Golf and I would urge anyone who believes they have seen the car or knows of its whereabouts to get in touch.

“It could be crucial to the investigation so if anyone has any information please message us or call.

“We are pursuing all lines of enquiry to find anyone else involved in Dea-John’s tragic death and anyone who has information should contact us.”

Police said racist language was directed at Dea-John before he was killed, and urged any witnesses to the “precursor incident” to come forward.

Officers previously said there was “nothing to suggest” the stabbing was racially motivated.

Dea-John’s family paid tribute to the “incredibly talented” teenager on Wednesday and called for an end to knife crime, saying: “How many more mothers will have to mourn for their sons for this to stop?”

The force said a post-mortem examination confirmed Dea-John died from a stab wound to the chest.

Man held on suspicion of double murder at same address

Six-year-old girl dies after being struck by car in Stoke-on-Trent, police say

Teenagers in court over stabbing murder of boy, 14

Man to stand trial next year charged with stabbing murder of boy, 14,

Katara bounces back to form with Pontefract Listed verdict