‘They pulled a gun on me’: Iranian poet recalls harrowing journey to the UK

Persecuted for his beliefs, talented Iranian poet Zartosht found his life at risk and was forced to flee his country.

He and his son endured terror and violence as they travelled through Europe, just wanting to survive.

Living in the Calais Jungle, Zartosht dreamed of taking his son to Britain. But high prices charged by people smugglers meant they had to split up.

Every second of the 13-hour journey across the English Channel, Zartosht was terrified he and the 14 other people in the dinghy would fall out and drown.

Humanitarian charity Freedom from Torture said refugees like Zartosht – and likely those who died on Tuesday – make dangerous journeys with their children because they have no other choice.

He is now reunited with his son in the UK and is receiving psychotherapy from Freedom from Torture after being tortured in an Iranian prison.

Following the news that four people died crossing the Channel on Tuesday, he volunteered to speak to the PA news agency about his experiences.

He spoke through an interpreter and chose the name Zartosht – after a 13th-century Persian poet – to be used in place of his real name to protect his identity.

Growing up in Iran, Zartosht came from a big family.

After his brother was killed in the Iran-Iraq war, Zartosht, aged just 14, and some of his friends went to fight on the front line.

“We were firing artillery and one of the shells was stuck in the barrel and we tried to release it and it exploded. Quite of few of us got killed,” he said.

As he recovered from his injuries Zartosht started writing poetry.

He wrote about falling in love, but some of his work became political about the regime.

They just put a bag over my head shoved me into the back of a car and took me somewhere, nobody knew anything about it.

Zartosht recalled one day sitting in a park with his girlfriend when police pulled up and arrested them.

He was sentenced to 50 lashes, which he says was the punishment for being caught outside with somebody.

He continued with his creative work, writing about the origins of Islam in Iran.

“Somebody just got a whiff of my poetry and they reported me – before I knew it I was arrested,” he said.

“They just put a bag over my head shoved me into the back of a car and took me somewhere, nobody knew anything about it.”

Zartosht was “disappeared” and held in a prison for four years before he was eventually released – thrown out on the street outside the city.

For a few months he moved back in with his wife and son. But soon police came for him again.

“They raided my house trying to arrest me again.

Zartosht felt he had no choice but to flee. He was smuggled into Turkey where he was eventually joined by his 10-year-old son and the pair worked in a clothes factory trying to make enough money to survive and get them to Europe.

One night he heard a 17-year-old girl screaming for help and stepped in to rescue her from two men who were attacking her.

She told them she also wanted to get to Greece and her fiance paid for Zartosht and his son’s travel in return for escorting her there safely.

When Zartosht and his son arrived in Greece, they spent 15 days in a detention centre before being sent to a migrant camp in Athens.

Zartosht said the camp was violent and there was little support. He was regularly beaten up and said he was stabbed at least once.

Eventually he and his son were given Greek documents which permitted them to travel through Europe.

They decided to travel to France and went to live in the Calais Jungle where things were better though he still had little money. 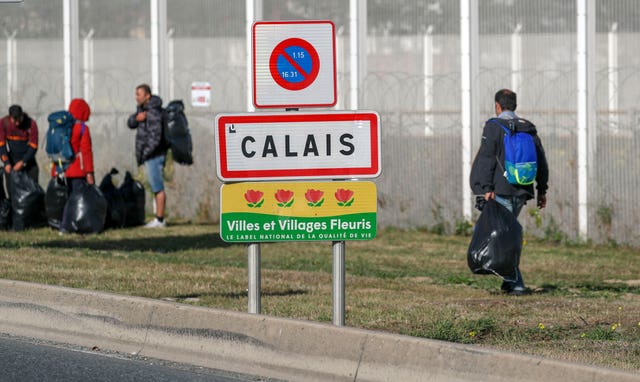 He was told that smugglers could get his son to Britain in a lorry for about 500 euros and he agreed, intending to follow as soon as he could afford it.

But one day Zartosht got back from the food queue to find his son gone and discovered that he had been put on a boat with 15 others and told to cross the Channel.

“I was worried sick. For 10 days I just couldn’t stop crying,” he said.

“I was alone and tearful.”

He worked until he got enough money together to make the crossing himself and paid the fee.

Zartosht described how he was forced aboard a dinghy boat with 14 others by a smuggler.

“They pulled a gun on me and said: ‘You either get in the boat or you lose your money and your life’.”

Among those on the boat with him were three women, a child and an old man.

During the terrifying 13-hour crossing, they were buffeted by waves and left floating at sea, not knowing where they were.

Eventually a French patrol boat made contact and told them they would have to return to France. But after pleading with them, eventually a UK Border Force boat approached.

As they were taken aboard, the weather got even worse. Zartosht said that if they had not been picked up they would have all drowned in the storm.

“Everybody was crying with joy that they were safe and that somebody had picked them up,” he said.

He was taken ashore in Dover and then on to a detention centre the next day.

About eight days later, he was reunited with his son. The pair have been housed in Birmingham while they wait for their asylum application to be processed.

He said he “absolutely adores” their new home because the UK is “such a green country”.

Most importantly, Zartosht said, his son has a place at college and is settled in.

He himself has filled a 200-page notepad with stories.

He now awaits a decision on their asylum applications, a process which he said is “unbearably stressful” and which he thinks should be made simpler.

Sonya Sceats, CEO of Freedom from Torture, said: “We have repeatedly called for safe and legal routes for people to access asylum in the UK and prevent these senseless tragedies.

“Instead, Home Secretary Priti Patel has spent the summer whipping up hysteria about the Channel and painting these vulnerable people as invading foreigners, for political ends.

“These tragedies will happen again and again unless we listen to the desperate stories of people like Zartosht and uphold our moral and legal duties.”

Health checks for migrants at Bosnia camp after days in cold

Watson among 47 players forced to quarantine ahead of Australian Open