More than 700,000 doses of AstraZeneca’s coronavirus vaccine have been sent from the UK to Australia according to reports.

Health Secretary Matt Hancock did not deny the reports in the Sydney Morning Herald and The Age about the shipment, despite the UK facing a squeeze on vaccine supplies.

The move comes with the UK, Australia and the European Union embroiled in rows over the export of vaccines.

The Australian news outlets reported that 717,000 UK-made doses have been flown in to help Scott Morrison’s government’s vaccination programme.

The first 300,000 UK-made doses landed at Sydney Airport on February 28, with a further large delivery on an Emirates passenger plane in March.

Mr Hancock did not dispute the reports but told Sky News: “We have made sure that we can get the jabs that we need here and that’s why we have the fastest rollout.”

He added: “In terms of what the companies do, these companies are manufacturing for all around the world and we source from everywhere in the world, so what I’m in control of, what matters for us as the UK Government, is making sure that we get the supplies that we have got contracted from the companies.”

But he said the UK Government itself did not send the doses.

He said: “No, the British Government has a contract with seven companies now, but of course including AstraZeneca, for the delivery by AstraZeneca to the UK for us to deploy through the NHS, and that’s the bit I’m responsible for.”

A Government spokesman said: “Producing vaccines is an international endeavour and the UK is proud to be playing a leading role in the global effort to develop and distribute the coronavirus vaccine.

“We are continuing to make exceptional progress through the rollout of our vaccination programme and remain confident in our supplies.

“The details of any commercial vaccine supply agreements between national governments and AstraZeneca are commercially sensitive and a matter for those two parties.” 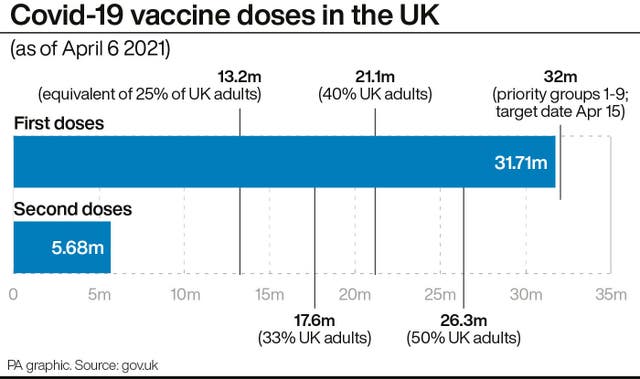 In March, the NHS warned there would be a significant reduction in vaccine supplies during April, which has been blamed on a delayed delivery from India and the need to retest a batch of 1.7 million doses.

Official scenarios produced by the Cabinet Office for researchers modelling the impact of the pandemic in late March also suggested a “considerably slower” rollout through to the end of July than previously expected, with around 500,000 doses a week fewer being administered.

The Australian government has been involved in a dispute with the EU over shipments of vaccines from the bloc, with a planned delivery of 250,000 doses made in Italy blocked in March by the Italian authorities.

Mr Morrison has claimed three million doses expected for Australia have not arrived, but the European Commission said only the one shipment has been blocked and the EU had also received fewer doses than expected from AstraZeneca.

“This is a global issue, it is definitely not simply a bilateral issue between one country and the European Union,” commission spokesman Eric Mamer said.

The European Commission has also raised the prospect of a ban on exports to countries that do not offer reciprocal shipments of vaccines or that are doing better than the EU in their vaccine programmes.

Both those measures could be used to target the UK, which has not supplied AstraZeneca doses to the EU.

State of the nations: How lockdown is being eased across the UK

Indoor hospitality in Wales expected to reopen on May 17

State of the nations: How lockdown is being eased across the UK

Indoor hospitality in Wales expected to reopen on May 17

Australia to follow US in withdrawing troops from Afghanistan

Warm and sunny conditions to persist through the weekend

What the papers say – April 23