Hamilton’s hopes of claiming his third win from four races appeared slim when he was left out on old tyres for four laps longer than his rival during the opening round of pit stops at Barcelona’s Circuit de Catalunya.

But the world champion’s Mercedes team rolled the strategy dice by calling in their star driver for a second time with 24 of the 66 laps remaining.

Hamilton was faced with a daunting 22-second deficit to overturn, but by the start of lap 60, Verstappen was within striking range.

The seven-time world champion followed the Dutchman at over 200mph along the pit straight before darting to the left and placing his Mercedes around the outside of Verstappen’s Red Bull to secure his 98th win and fifth in as many visits to Spain.

“That is what we are taking about, Lewis,” said Hamilton’s race engineer, Pete Bonnington, over the radio.

Team principal Toto Wolff, who watched the action unfold with Sir Jim Ratcliffe, one-third owner of Mercedes and Britain’s richest man, threw his arms up in celebration as Hamilton executed the comeback.

Ratcliffe then joined Hamilton on the podium to toast a win which moves the 36-year-old 14 points clear of Verstappen in the title race.

Hamilton’s latest triumph arrived 24 hours after landing his 100th pole – a landmark which led Damon Hill to describe his compatriot as one of the most talented people to have walked the Earth.

“There is still some life in this old dog,” said Hamilton, 13 years older than Verstappen. “I saw Damon’s tweet yesterday, and I feel so much gratitude towards him.

“I remember growing up watching Damon and having, as I do now, so much respect for him. I was routing for him as a Brit to succeed even when he didn’t have a great car or good team.

“It is definitely humbling when you see people you have admired and watched or taken inspiration from and hearing them say positive and respectful things.

“This is a period of time where I have to be at my best because Max is driving exceptionally well.

“It is so close between all of us that it is going to take perfect delivery every weekend. I don’t think anyone can do that but it is about getting as close as possible.”

This might be Hamilton’s 15th campaign, but he is showing few signs of slowing down. Indeed, with three victories and a second place under his belt, Hamilton is enjoying his best start to a season. 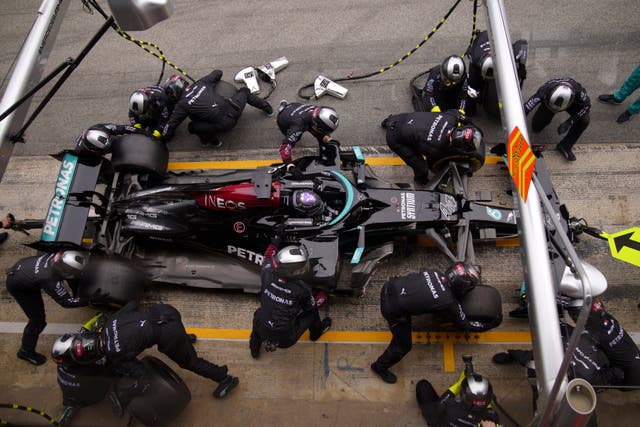 He opened his bid for victory  in Spain on the backfoot after losing the lead during the 600 metre stampede to Turn 1.

Hamilton was hardly sluggish, but the world champion afforded Verstappen an opening at the first corner and the ruthless Dutchman did not need a second invitation.

Bolder and braver on the brakes, Verstappen launched his Red Bull down the inside of Hamilton’s Mercedes. Hamilton turned in for the right-hander and came within millimetres of making contact before conceding the position.

On lap 24, Verstappen switched to new tyres but a slow stop handed the initiative to Hamilton. Pitting for rubber on the next lap would have seen Hamilton emerge in the lead but Mercedes kept him out, leaving Hamilton to win it the hard way with a second stop.

Hamilton insists he has no interest in psychological warfare but after trailing Verstappen for 60 of the 66 laps he dropped a post-race comment which may niggle away at the back of his title rival’s mind.

“I learnt a lot about Max today, perhaps more than all the other races put together,” he said. “This has been a good race in that sense.”

Asked to elaborate, Hamilton smiled: “No, not particularly. When you are with people on track you get to see different things up close. I learnt a lot about his car and how he uses it.”

In the closing stages Verstappen bolted on a set of new tyres to post the fastest lap and claim a bonus point as some consolidation.

On a different strategy to Hamilton, Bottas was ordered by Mercedes to move out of his team-mate’s way. It was with some reluctance that he did.

He later admitted: “I definitely could have let him by earlier.  I am not here to let people by. I am here to race.”

The Finn is already 47 points behind Hamilton and the smallest of hopes he had of fighting for the title appear over with 19 rounds still to go.

Ross Brawn hopes title marathon is not decided by a sprint

Ross Brawn hopes title marathon is not decided by a sprint

Toto Wolff: Lewis Hamilton to sign at least two-year deal and can race beyond 40