George North says it will be “very special” to gain membership of Wales’ 100-cap club when he lines up against England on Saturday.

Wales head coach Wayne Pivac has praised North’s attitude and appetite as he prepares to become a rugby union record-breaker.

North will reach a century in the Guinness Six Nations clash at the Principality Stadium.

And at 28 years and 320 days, he will eclipse Australia captain Michael Hooper by four weeks as the youngest player to clock up 100 appearances for their country. 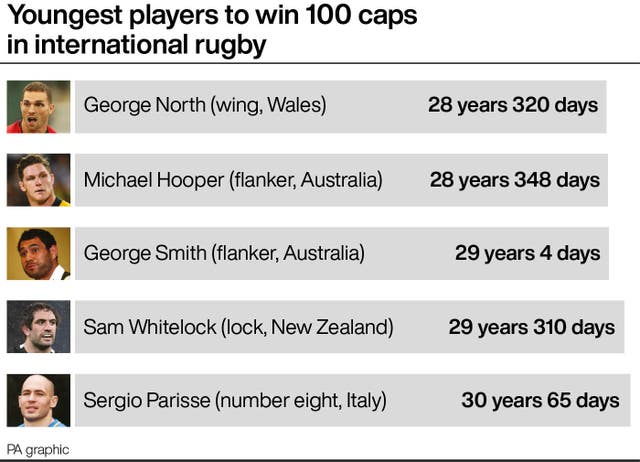 North made his Test debut as an 18-year-old wing in 2010, scoring two tries against South Africa, and he becomes the sixth player to hit 100 for Wales after current captain Alun Wyn Jones, Gethin Jenkins, Stephen Jones, Gareth Thomas and Martyn Williams.

“I never thought I would even get one cap for Wales, let alone 100,” North said.

“It has been a long road – a load of ups and downs – but it has been worth every single second. I never thought I would get here, so I am really chuffed.

“When you are in the pressure pot, the mixer, you don’t really have much time (to think about records), you are on to the next job or the next fixture. They come thick and fast.

“I am sure there will be a time when I am sat there with a coffee telling Jac (North’s son) that I used to play rugby once and I was half-decent, but he will probably laugh it off!

“To be able to say I played for Wales is incredible, but to say I was in a very rare club of 100 caps is very special.”

Looking back on his first Wales appearance, North added: “It was probably one of my fondest memories ever in a jersey.

“The lead-up to that was a whirlwind ride from Scarlets academy up to having a go with the seniors, playing a few games for Llandovery RFC, then getting a phone call to come into (Wales) camp and then getting my first cap.

“I was fortunate enough to play with some of my heroes that I grew up watching in that game that are still in the camp.”

It will be Navidi’s first Wales start since the Six Nations game against England at Twickenham almost a year ago, while Hardy has not previously featured in the tournament.

Paying tribute to North, Pivac said: “He is still highly-motivated and wants to play for Wales well past 100 games. I am sure he is going to do that with the attitude he is showing at the moment and the form he will bring to the 13 jersey.”

Alun Wyn Jones holds the Wales cap record on 145 Test appearances, and Pivac added: “He (North) is certainly the one that is going to challenge that number if he stays fit and his form continues to hold.

“The big fella is very keen to keep pulling the jersey on. He has still got that appetite that he had as a youngster.”

Victory for Wales over England would clinch the Triple Crown and keep Pivac’s team firmly on a Six Nations title course heading into appointments with Italy and France next month.

But he expects a fierce challenge from Eddie Jones’ England, whose own title chances will suffer terminal damage if they lose in Cardiff.

“Having dropped the first game (against Scotland), that makes them even more dangerous because the pressure comes on in this particular match,” Pivac said.

“They won the Autumn Nations Cup, they have a proven history in recent Six Nations. From our point of view, they are the team to beat.”

What factors did the RFU find contributed to England’s poor Six Nations showing?

Welsh parties accuse Drakeford of ‘inappropriate’ use of Covid briefing

Outdoor hospitality to reopen in Wales next week